Iran Global Terrorism “Back Up List of Immediate Threats” To U.S.

An operative from Iran’s Quds Force – an elite branch of the Iranian Revolutionary Guard that conducts overseas terror operations – was caught by Bulgarian authorities conducting surveillance of Sofia’s only synagogue in July 2012, just days after the Burgas, Bulgaria bus bombing that killed five Israelis and a Bulgarian.

A new report from the Washington Institute’s Matthew Levitt details the incident. The surveillance of the Sofia synagogue mirrors activities conducted by Hossam Taleb Yaacoub, a confessed Hezbollah member convicted last month on five terror-related charges in Cyprus. Yaacoub was caught monitoring hotels and kosher restaurants frequented by Israeli tourists on behalf of Hezbollah. The Iranian operation in Bulgaria, however, may have been done without coordination [PDF] between Hezbollah and the Quds Force:

Contrary to conventional wisdom, however, while Hizballah and the Qods Force have worked together on some plots—Baku in 2008, Istanbul in 2009, among others—in other cases they failed to deconflict their operational activities and found themselves engaged in completely disparate operations in the same place. When Hizballah operatives laid the groundwork for a bombing in late 2011–early 2012 in Bangkok, they were apparently unaware that the Qods Force was also preparing for an attack in the same city. Whether the Qods Force was, in turn, ignorant of Hizballah’s activities there is unclear, but the Iranians appear not to have known Hizballah was using Bangkok as an explosives distribution hub. And even once Hizballah operative Hussein Atris was arrested in January 2012, the Qods Force operation there was not suspended. Similarly, within days after the explosion in Burgas — while the investigation into the bombing and the search for accomplices was at its height — Bulgarian authorities reportedly caught a Qods Force operative scoping out a synagogue in the country’s capital, Sofia.

Levitt highlights the danger that both groups pose to the United States:

The net effect of Iran’s shadow war against the West is that Hizballah and the Qods Force have climbed back up the list of immediate threats facing the United States and its allies. In July 2012, NCTC director Matthew Olsen warned that while Iran and Hizballah had not yet hit targets in the United States, U.S. officials worry that could soon change. “We’re seeing a general uptick in the level of activity around the world,” he noted, adding that “both Hezbollah and the Qods Force have demonstrated an ability to operate essentially globally.” In fact, the Hizballah–Qods Force threat has sometimes eclipsed that of al-Qaeda… the recent failures of Hizballah and the Qods Force give Western counterterrorism officials little comfort. As the attack in Burgas demonstrated, terrorists learn from their mistakes, evolve, and adapt, and with sufficient determination they may carry out successful attacks even after a long string of failures.

The scope of Iran’s international terror network – conducted through the Quds Force, through Hezbollah, and through a range of other proxies – has been cited by officials as the impetus for broad measures against Tehran and its allies. The U.S. has been leading calls for the European Union to formally blacklist Hezbollah as a terror group, with President Barack Obama explicitly reiterating the need to designate the group last month in Jerusalem.

Hezbollah this week lashed out against the president and his administration. The group – which risks war with Israel “at Iran’s behest,” which has participated in global Iranian terror campaigns at the expense of Lebanese institutions, and which has dragged Lebanon into the Syrian conflict on behalf of Iran – accused the U.S. president of undermining Lebanese sovereignty.

An infographic published by The Israel Project highlights the global reach of Iran’s terror network: 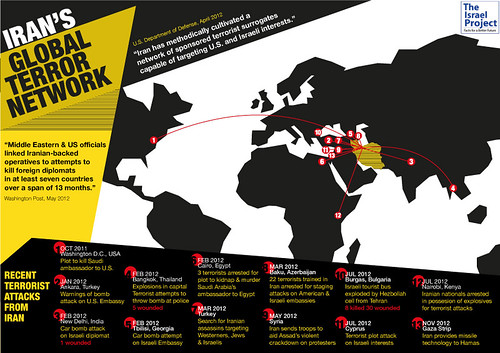