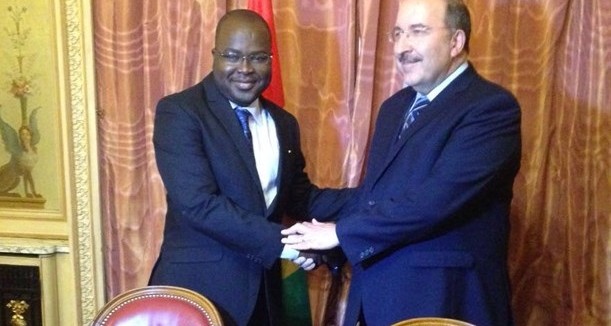 Israel and the West African nation of Guinea announced on Wednesday that they had reestablished diplomatic ties, 49 years after the Muslim-majority country withdrew its recognition following the Six-Day War in 1967.

The agreement was signed in Paris between Dore Gold, the director-general of Israel’s foreign ministry, and Khalil Kaba, chief of staff to President Alpha Condé’ of Guinea.

“This is an important closing of a circle,” Gold said. “The number of countries on the African continent that still haven’t [re-established ties with Israel] is steadily decreasing, and we’re hopeful that that soon this number will not exist anymore. Israel is calling on the countries that still haven’t renewed diplomatic relations to follow in Guinea’s footsteps so that we can work together to the benefit of all peoples in the region.”

Even without formal diplomatic ties, Gold noted, Israel extended aid to Guinea during its fight against Ebola in 2014, donating $10 million to the international UN fund to combat the disease and deploying a medical team to Conakry, the capital city.

Paul Hirschson, currently Israel’s Senegal-based ambassador to several western African nations, will also serve as ambassador to Guinea. Guinea has a population of 10.5 million, 85 percent of whom are Muslim.

Earlier this month, leaders of seven African nations called Israeli Prime Minister Benjamin Netanyahu’s historic trip to Africa as “the opening of a new era in relations between Israel and the countries of Africa.” The Jerusalem Post reported that Netanyahu spoke by phone with Condé’ during the trip in a call facilitated by one of the heads of state Netanyahu met with.

Netanyahu also reportedly had a recent meeting with Somali President Hassan Sheikh Mohamud. The meeting is a considered a diplomatic breakthrough, as Somalia is a Sunni state that is a member of both the Arab League and Organization of Islamic Cooperation, neither of which have ever recognized Israel.

Israel has also recently strengthened ties with South Africa, signing a number of bilateral agreements this past March. The Jewish state has established or strengthened ties with many nations across the globe in recent years. Israel’s successful diplomatic engagement allowed Netanyahu to say at the AIPAC policy conference in March that “today we have diplomatic relations with 161 countries – more than at any time in our history.” That number has now increased.