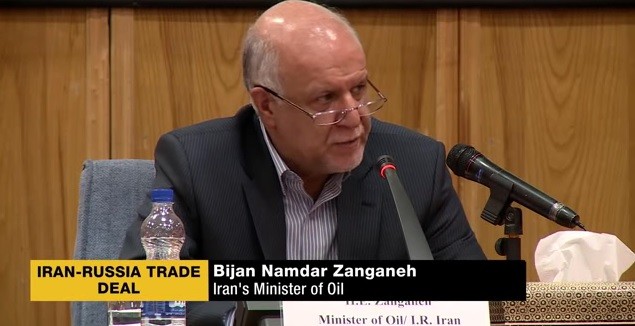 In a Further Blow to Sanctions, Iran and Russia Announce Major Trade Initiatives

Agence France-Presse (AFP) reported Wednesday that Russia and Iran have successfully laid the groundwork for what the outlet described as a “strategic partnership aimed at vastly expanding trade and investment,” with observers describing the maneuver as a way for the Iranians to dodge Western sanctions pressure:

According to a Western diplomat in Tehran, the new partnership with Russia, with whom there is a history of complicated relations and mutual mistrust, would be “an insurance policy against a pessimistic scenario on the outcome of [nuclear] negotiations.”

Ramin Rabbi, director of investment fund Turquoise Partners, said “this is Plan B for Iran if the negotiations fail.”

Rumors of a sanctions-busting energy deal between Iran and Russia had started to coalesce last March, when news of a potential $20 billion oil deal began to emerge. Mark Dubowitz, the executive director at the Foundation for Defense of Democracies, assessed at the time that the dynamic – continued P5+1 nuclear negotiations with Iran, even as Tehran’s deals with Russia eroded Western leverage – would “serve as a signal to other countries that the United States won’t risk major diplomatic disputes at the expense of the sanctions regime.”

Within a week analysts had unpacked the potential import of energy deals, noting that they would among other things allow Iran to upgrade its military capabilities as a hedge against Western pressure.

Reports that emerged this week indicate that Tehran and the Kremlin committed to cooperation far beyond the energy sector, even as officials from the two countries denied that the previously rumored oil-for-food deal had been inked. AFP had already reported on Tuesday that the Russians were in Tehran with the intention of boosting economic ties across a range of industries:

Iran’s Oil Minister Bijan Zanganeh and Alexander Novak Minister of Energy of Russian Federation oversaw a meeting Tuesday of businessmen in Tehran, calling on them to increase trade.

Zanganeh said: “God willing, we will quickly increase the level of relations up to more than 10 times.”

Novak expressed the readiness of Russia for industrial cooperation, saying: “We have a lot of capabilities to strengthen our cooperation in the fields of electricity, natural gas, oil — as well as nuclear plants and aircraft parts and other equipment.”

The New York Times at the same time described the Russian-Iranian moves as aimed at “subvert[ing] the Western sanctions on its contentious nuclear energy program.”

One of the deals announced on Wednesday will see Iran importing ten million tons of wheat from Russia. The Russians for their part committed to boosting their purchases of dairy and farm products, and Iran will reportedly triple its current $600 million per year import of poultry, meat, and shrimp products.

Iran has for years been plagued by food price inflation, much of it driven by Western financial restrictions, and the destabilizing cascades generated by the price fluctuations were considered critical in the West’s efforts to pressure Iran into trading nuclear concessions for sanctions relief. Tehran had desperately sought to diversify its food sources in order to outmaneuver the Western measures.