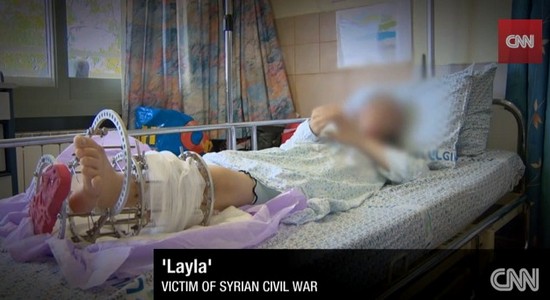 NBC News last week described Israel as a “sanctuary” for wounded Syrians, with doctors having tended to scores of patients who have fled the war-torn country. More than 120 Syrians have received medical treatment in various Israeli facilities during the two and a half years of the Syrian civil war.

One location has even become a kind of epicenter in the effort: Western Galilee Medical Center in the coastal Israeli city of Nahariya.

Israel has generally and deliberately kept a low profile about its humanitarian medical operations. Syrian civilians brought to Israel for treatment – usually by IDF troops at the border with the Golan Heights – face retribution upon returning home:

“I brought my girl here because she was hit by a sniper’s bullet,” said a weeping woman as she tended her 13-year-old. “The hospital in my town was destroyed.  They have saved her here, but now I am afraid to go back.  We will be marked”… “Most of them arrive unconscious,” said Masad Barhoum, clinical director at Western Galilee Medical Center. “When they wake up and find that they are in Israel they are anxious and afraid.  We don’t ask them any questions, we just do what we can to make them feel comfortable…”

Barhoum – like many of the hospital’s doctors and staff, and many in that region of Israel – is an Arab-Israel. In a 2007 interview with Haaretz he contextualized his career within broader debates over Israeli identity:

Barhoum says he is “an Israeli, an Arab and a Christian – in that order. I was born in this country and I’m proud to live here. Not that I deny my Arab nationality: In the broad category of Arab nationality, I belong to the subcategory of Christians.”… “I feel more Israeli than Palestinian. I can’t say things that I don’t feel. My Arabness is a combination of Arab and Palestinian. I feel Israeli in every respect. I have a certain connection to the Palestinians, but I was born and raised in Israel, so my ties to Israel are closer.”…

Studying medicine, he says, was the fulfillment of a childhood dream. After graduation, he began his internship in internal medicine at Rambam, but switched to family medicine three years later. At the time, his wife, Dr. Marie Nofi-Barhoum, was doing her internship in pediatrics at Hillel Yaffe Medical Center, in Hadera. Today she is a resident in pediatric endocrinology at Afula’s Ha’emek Hospital.

The hospital’s location – just miles from the Lebanese border – means that Western Galilee Hospital has experience dealing with casualties of war. It was the chief destination for soldiers and civilians injured during the 2006 Second Lebanon War, treating some 1,800 civilians and 300 IDF troops. The hospital even suffered a direct rocket hit that destroyed an outer wall and eight of its rooms.

Until Israel’s 2000 pullout from Lebanon, the hospital even provided free eye treatment to countless Lebanese civilians. As one eye doctor, Dr. Uri Rehany, would later recall:

“One-third of the patients in my department were Lebanese inhabitants. The came across the border through what we call ‘the good fence’ and got treatment free of charge. It’s ironic. These same inhabitants had treatment at the hospital they hit.”

Western Galilee Hospital is one of three hospitals in northern Israel treating significant numbers of Syrians. Here, a recent CNN from the Rebecca Sieff Hospital (or Ziv Hospital) in Safed, where half of all intensive care beds are filled by Syrians wounded over the last week alone.