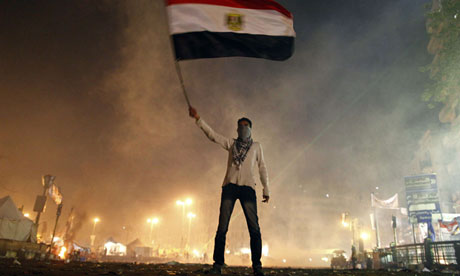 From Ramallah to Cairo, The Winds of Change — and Tension — Are Blowing

The tête-à-tête vis-à-vis Israel has now become hugs and kisses, and Obama is gradually bidding adieu to his landmark Cairo address in favor of his new address in Jerusalem.

The president’s remarks at a joint press conference Thursday with Palestinian Authority President Mahmoud Abbas in Ramallah underscore just how wide the gap is between the President Obama of 2009 and the reality of today.  Rather than counterproductive unilateral calls for Israel to stop building, an implied censure of Abbas for insisting on preconditions for negotiations – like that very same freeze.

It’s no wonder the only place the president was even politely received was at Palestinian Authority headquarters in Ramallah. A few hundred meters away from the Muqata, a protest raged against the visit, and across the West Bank pictures of the president were defaced.

Earlier in the week, protesters in Bethlehem’s Manger Square tore down a billboard welcoming the president, spray-painted a swastika on the image of his forehead, and left it in the street for cars to drive over. A video shows official Palestinian Authority cars driving over the billboard. Bethlehem protesters this week also threw shoes at a U.S. diplomatic vehicle arriving in the city to prepare for Obama’s visit. They then set fire to and trampled a picture of the president before stuffing it into a trash dumpster. In Hebron, Palestinian demonstrators staged an anti-Obama march while wearing masks of Obama and Martin Luther King, Jr.

On Thursday, four Qassam rockets were fired from Gaza into Israel, aimed at Sderot, a city President Obama visited on his last trip to the Jewish state. Perhaps it was Hamas’s way of showing the president that it’s certainly not interested in any kind of two-state solution, and that Gaza will not be ignored.

And yet Hamas hasn’t settle for just that.  Earlier this week , The Tower that over the past month, Palestinian security forces have exposed and arrested members of five Hamas cells that were intending to conduct terrorist bombing attacks and kidnappings targeting Israeli soldiers and civilians. The last such cell was uncovered early this week in Surif (a village southwest of Bethlehem) in possession of 20 kilograms of explosive material, and is believed to have been planning to abduct an Israeli.

One can only imagine the terrible damage a Hamas kidnapping or terror attack during Obama’s time in Israel would have had on the visit. Moreover,  the masterminds behind the five Hamas cells broken up before they could carry out their terrorist attacks were all released in the Gilad Shalit prisoner exchange.

The release of terrorists convicted of crimes and serving time in Israeli jails remains a top issue for the PA, and in his remarks Abbas made special reference to his hopes of  releasing them – particularly those who have been incarcerated since before the Oslo Accords. This, perhaps, could be the ladder Abbas has been looking for to climb down from the tree he’s climbed into over the settlement freeze. If Israel agrees to free longtime prisoners, the PA would win so many points on the Palestinian street that hardly anyone would raise a fuss over a few new housing units in Gush Etzion or the Jewish neighborhoods of Jerusalem.

One can hardly envy Egyptians these days, and those living in Cairo in particular. While Israelis living in Jerusalem complained this week about road closures in the capital due to the presidential visit, the serial inconvenience of massive traffic stoppages on main thoroughfares has become a common, almost everyday sight in the Egyptian capital. The small but significant difference is that while in Jerusalem closures are the work of authorities and  police, in Cairo the daily, paralyzing disruptions are the result of increasingly popular and violent protests. From taxi and bus drivers rallying against the lack of subsidized fuel, to bakery owners demanding government subsidies to bake bread, unrest in Egypt is spreading.

For decades, bakery owners have sold their bread at ridiculously low prices, and then received government subsidies to cover their losses. In recent weeks, however, authorities have not provided the bakers the usual sums, and sometimes haven’t transferred any money at all.

On Tuesday the Muslim Brotherhood-led government took a sweeping step – and one that smacks of overreaching: rationing subsidies. No longer will Egyptians be able to afford to buy as much bread as they could find, but will instead receive a card allowing them to purchase a limited number of subsidized loaves per day. For the rest, they’ll have to pay full price. While this may sound like a minimal change, in a country where poverty is increasingly the norm, and economic doomsday looms larger with every sunset, the corrosive effect of perceived poverty, as well as true destitution, is dangerous.

Egypt has tried in the past to limit – or even end – the distribution of subsidized bread. In 1977, during the rule of Anwar Sadat, Egyptians responded with the “Bread Uprising” after the president tried to rein in subsidies. Sadat suppressed the rebellion with a combination of International Monetary Fund loans and the brute power of his security forces.

Today, if a new attempt at cutting subsidies leads to public demonstrations, President Morsi will have a far more difficult time of it than Sadat. First, the IMF is now conditioning Egypt’s desperately needed $4.8 billion loan on reducing the subsidies, which make up a full quarter of Egypt’s budget – particularly those for bread and fuel. Without those steps, the IMF will withhold its largess, leaving the country is in increasing danger of going broke.

The elimination of these subsidies has created an tense atmosphere, one fearing public demonstrations that can quickly turn into mob violence. It is possible that such unrest could even reach the levels seen in January 2011 during the protests that toppled former President Hosni Mubarak – and could even lead to ousting Morsi himself.

Should Morsi’s mismanagement of Egypt  result in major upheaval and should he need protection from his security forces, it is not clear that that the army will lift a finger to save him. In fact, the military is sending clear signals of fundamental disagreements with Morsi’s views – and expressing frustrations in part shared by the King of Jordan.

At the start of his term, Morsi installed Abdul Fattah al-Sisi as defense minister and Sedki Sobhi as military chief of staff, appointments many Egyptians saw as an attempt to cleanse the army of the old guard of Mubarak’s “deep state.”

But that process is still far from over. The army and security apparatuses remain entirely hostile to the Muslim Brotherhood and its president, and Sisi is today one of the strongest opponents of Morsi within the regime. The same is true in the intelligence services, where hostility is better disguised but could quickly be unleashed over one of two issues: Hamas and Israel.

Recent weeks have seen the security forces – and particularly the military – wage a concerted media campaign against Hamas. Begging with unprecedented accusations that three top Hamas figures had played leading roles in the August attack that killed 16 Egyptian soldiers in Sinai, the cold-war media campaign against Hamas continued with the military announcing the arrest of eight Hamas operatives trained in Iran. They were arrested upon their arrival in the country, caught armed with maps and equipment indicating their plans to carry out terrorist attacks within Egypt.

On Wednesday, revelations emerged that the Egyptian military had intercepted large quantities of special fabric destined for Gaza, where an unidentified Palestinian group planned to make fake Egyptian army and police uniforms for use in attacks on Egyptian soil.

Such exposure by Egyptian military and security figures of the national security threat that Hamas poses to Egypt itself must be seen, source tell The Tower, as a bid to besmirch the Muslim Brotherhood.

Egypt’s ties with Israel are second point of major contention between the army and Morsi. While Morsi does everything he can to downgrade relations with Israel, military and intelligence ties with Israel are going from strength to strength. Last week, an Egyptian military intelligence delegation traveled to Israel for sensitive consultations and to brief Israeli counterparts on key issues, including those described above, but the IDF Military Censor forbade publication of the visit, fearing it might harm Egyptian-Israeli relations. But the Censor, like other relevant Israeli military bodies (the Planning Directorate and Military Intelligence), apparently failed to consider that it was the direct intent of the Egyptian army to telegraph to Israel – and more importantly, to the U.S. Congress and the Obama administration – that bilateral security ties with Israel have “never been better,” and that in the coming months, as Egypt risks increasing unrest and economic collapse, that the Egyptian army will act as a force for stability, and is committed to acting against Hamas and those, foreign or domestic, who threaten Egypt’s national interests and security.

The diplomatic disconnect between Morsi and Jerusalem has spurred the Egyptian army to fill the void created by the Muslim Brotherhood’s hostile approach to dealings with the Jewish state. Perhaps foreshadowing things to come, the Egyptian army and security forces are emerging as a force for regional stability, opposition to Iran and their terrorist proxies running Gaza, and assuming the the leading role in safeguarding not only peace, but deepened, mutual cooperation with their Israeli counterparts across the Sinai in Jerusalem and Tel Aviv.