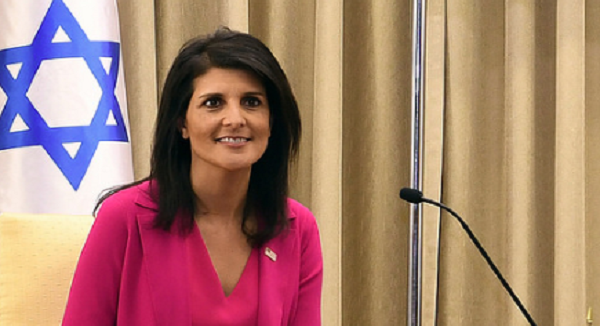 Former United States Ambassador to the United Nations, Nikki Haley, was awarded the 2019 Friend of Israel Humanitarian Award by the Greater Miami Jewish Federation for her steadfast and courageous support of the Jewish State as part of her public activity, The Miami Herald reported Tuesday.

In her speech to the sold-out crowd at the Hilton Miami Downtown, Haley said backing Israel was “one of the easiest things I did in the UN.

“It was about doing what was right; it was about telling the truth,” the former ambassador added. “Fighting for Israel was not just a job for me; it was the right thing to do,” Haley explained.

Jacob Solomon, president and CEO of the federation, observed that Haley had been selected for the award to thank her for supporting Israel during her UN tenure and for challenging institutionalized anti-Semitism at the international body.

“I think the community, regardless of their political leanings, recognizes what an extraordinary force on behalf of Israel she has been at the United Nations,” Solomon said. “She had a fiercely independent voice at the United Nations and she really stood for a truthful and honest treatment of Israel.”

Haley responded: “It is an honor and pleasure to accept this award. I can promise you I’m too young to stop fighting.”

In the nearly two years that Haley served at the UN, she had many shining moments as she made good on her promise to fight chronic “anti-Israel bias” at the UN. In February 2017, Haley vowed that the U.S. “will not turn a blind eye” to the singling out of Israel anymore.