On Tuesday I reported that a college textbook called “Global Politics: Engaging a Complex World” included the infamous “Map that Lies” propaganda poster as fact.

Sharona Schwartz of The Blaze contacted the company:

The McGraw-Hill Education book publisher said Wednesday that it would temporarily stop selling one of its college world politics textbooks so that it could review a previously discredited series of maps about the Israeli-Palestinian conflict that was included in its pages. 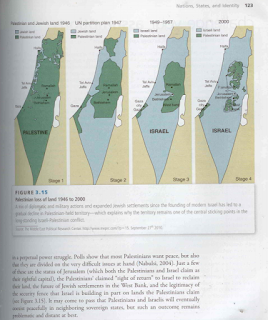 The graphic purports to show how Israel has taken Palestinian land over five decades.

“Pending a review, we are placing a hold on sales of the book,” Catherine Mathis, chief communications officer for McGraw-Hill Education, told TheBlaze via email in response to a request for comment.

I am quoted in the article.

“I was shocked and astonished to see this deceptive and false graphic being used in the textbook. Up until now, it had only been used in anti-Israel propaganda,” blogger Elder of Ziyon told TheBlaze via email. “The authors edited the graphic to make it even worse, referring to each successive panel as a ‘stage’ as if the Jews have been planning to dispossess Arabs for over seventy years.”

A search of college syllabi online shows that the book is being or has been used in courses at Northwestern Oklahoma State University, University of Indianapolis, Western Illinois University, George Washington University School of Business, and Marshall University.