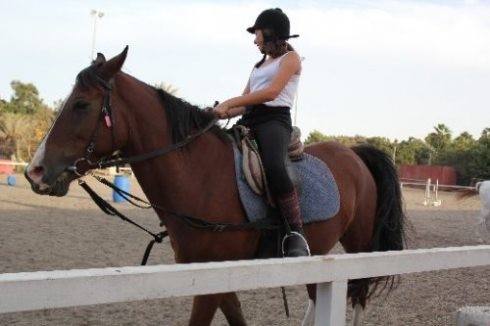 “I don’t want to be an icon,” says Shachar Rabinovitz. But in the space of a few days this week, the 13-year-old has already started to become a poster girl of sorts.

She’s siting on her sofa, shell-shocked at the international media frenzy that has taken place this week. On Sunday, she went to school, went to the dentist, returned to the northern Israel kibbutz Regavim where she lives, opened her emails, and then suddenly found herself propelled in to the news.

To many, her experience this week sums up the case against the BDS movement. Over the weekend, she became the youngest ever subject of the academic boycott of Israel. A former Cambridge University academic, Marsha Levine, had written to Shachar refusing her request for information on horses because she is Israeli. “I’ll answer your questions when there is peace and justice for Palestinians in Palestine,” Levine wrote, going on to add: “You might be a child, but if you are old enough to write to me, you are old enough to learn about Israeli history and how it has impacted on the lives of Palestinian people.” Shachar’s father posted the reply on Facebook, and it went viral.

“When I saw the response I was speechless,” Shachar recalls, glancing at the old desktop computer where she saw the message as if to relive the moment. “I got upset. I don’t think an old and wise person needs to put her political opinions in an email to a 13-year-old who asks her about horses.”

Shachar says she has hardly any political knowledge. “I don’t really understand politics,” she states, talking quickly, clearly unaccustomed to all this interest in what she has to say. Her only passion is horses, and she rides weekly, draws horses on all her school notebooks, and already has plans to buy ranch “when I retire.” And this passion prompted her, when told for a school project to interview someone, to contact Levine.

“I read her article, having come access it, and as I needed to interview someone I was really excited to to find her email on the end and I emailed her. The only thing I said that has connection to Israel is that I’m from Israel.”

Levine, who is Jewish, has stood by her response, and upped the ante since then, telling the Jewish Chronicle that because there is support in Israel for the country’s conduct in relation to Gaza, “Jews have turned themselves into monsters.” This rhetoric has been hard for Shachar and her family to take. Her parents see themselves as political moderates, and live in a region of Israel where Jewish and Arab communities are close to one another, and take pride in their daughter’s achievements in her Arabic classes at school.

Her father Shamir Rabinovitz says that Levine and the boycott movement label Israelis as a political monolith. “The blind view of the [Israeli] people as taking one view isn’t serious.”

Shachar’s parents are nervous about the publicity that their daughter has been receiving. They have refused to release photos of her that show her face close-up, and her mother Galia Granot said that she doesn’t want to see her becoming a kind of anti-BDS celebrity. But the family is starting to realize that hers is a story that won’t be forgotten — rather, it will be brought up in almost every discussion about BDS and how far removed from the any of the political decision making Israelis can be and still find themselves subject to boycotting. “It’s a kid, not someone involved in politics,” says Shamir Rabinovitz. “She’s not responsible for bad things that happen around her — she’s not the Prime Minister.”