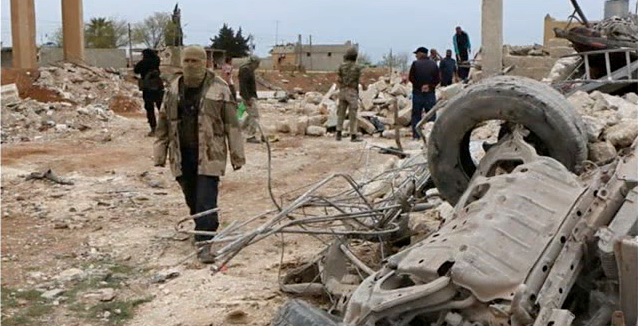 The Organization for the Prohibition of Chemical Weapons (OPCW) confirmed the use of mustard gas, a powerful chemical agent, during a battle in the northern Syrian city of Marea on August 21, the BBC reported Friday.

The OPCW report has not yet been published, but journalists who have had access to its findings say it concludes “with utmost confidence that at least two people were exposed to sulphur mustard”.

The report does not apportion blame, but diplomatic sources have confirmed the weapon was used in clashes between IS and another rebel group taking place in the town at the time, Reuters news agency reports.

Sulphur mustard – commonly known as “mustard gas” although it is liquid at ambient temperature – is a powerful irritant and blistering agent which causes severe damage to the skin, eyes and respiratory system and internal organs.

While the chemical attack took place during hostilities between the Islamic State of Iraq and Syria (ISIS) and a local rebel group, the report does not assign blame to either.

Shortly after the attack was first reported, The Wall Street Journal wrote (Google link) that one of the ways ISIS could have obtained the mustard gas was by capturing the chemical weapons stockpiles of Syrian dictator Bashar al-Assad, which were supposed to have been eliminated under an international agreement administered by OPCW.

The Syrian regime said in 2013 that all of its mustard agent stockpiles had been destroyed, either by Syrian forces themselves or by international inspectors. Inspectors, however, have subsequently said they weren’t able to verify claims by the Syrian government that it had burned hundreds of tons of mustard agent in earthen pits.

Assad agreed to the Russian-sponsored deal to remove his regime’s chemical weapon stockpiles following an August 2013 chemical attack on a Damascus suburb that killed over 1,400 people, according to a preliminary assessment by the White House. Critics have expressed doubts that the deal could effectively remove all of Syria’s stockpiles, concerns which were validated earlier this year when inspectors found deadly nerve agents at a previously undeclared site in Syria.

The Wall Street Journal reported in July that American intelligence officials confirmed that Assad remained in possession of chemical weapons despite the agreement. One of the factors given for the deal’s ineffectiveness was Syria’s ability to control the sites that inspectors could visit.

Ely Karmon, an Israeli intelligence expert, later wrote that the same weaknesses that undermined the chemical weapons deal could very well hinder verification of the nuclear deal with Iran.

If this is the record of the international community in dismantling and monitoring the chemical and nuclear facilities in Syria, how exactly it will do better in monitoring the vast Iranian nuclear infrastructure? Would indeed Iran, the cat guarding the milk, be responsible for collecting its own soil samples from suspected nuclear sites to turn over to the IAEA for inspection, as revealed during the first Senate Foreign Relations Committee hearing on the nuclear deal?