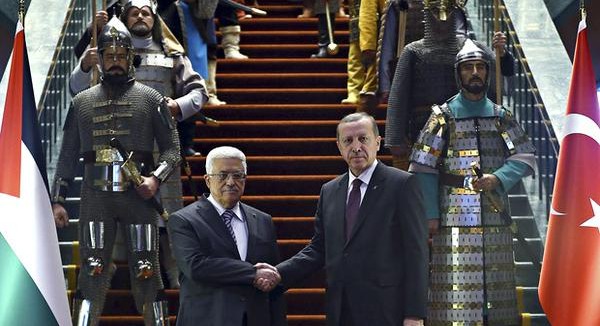 Palestinian Authority President Mahmoud Abbas was welcomed to Turkey with a knight’s honor by Turkish President Recep Tayyip Erdogan. When the two shook hands on the steps of Erdogan’s new luxurious and controversial palace in Ankara, they were surrounded by 16 guards dressed as knights in armor and carrying spears or swords with several sporting fake bushy moustaches (Arabic link for video).

The Turkish news agency Anadolu (Arabic link) explained that the 16 guards symbolized the 16 empires in Turkish history, including the Seljuks and Ottomans. Agence France-Presse noted the symbolism gave hints of possible grander plans by Erdogan:

These 16 empires are also symbolized in the 16 stars of the official seal of the Turkish presidency that has been given a new prominence since Erdogan moved from the office of the prime minister in August presidential elections.

Erdogan in October opened his hugely controversial new presidential palace, which has 1,150 rooms and cost of around $615 million.

The extravagant spectacle in the presidential palace lends credence to complaints within Turkish society that Erdogan is trying to Islamize every aspect of the life in the country, undermine its modern and secular foundations, and restore the days when the Ottoman Empire ruled the Middle East.

Erdogan opened his hugely controversial $580 million, 1,150-room presidential palace on the outskirts of Ankara in October. He said the palace is a symbol of the “new” Turkey that he is building, but opponents have decried it as a ridiculous extravagance in an increasingly authoritarian state.

Erdogan took advantage of his meeting with Abbas to launch a savage personal attack on Israeli Prime Minister Benjamin Netanyahu for “daring” to attend Sunday’s solidarity march in Paris, accusing him of conducting “state terrorism” against the Palestinian people.

At no point in his remarks did Erdogan condemn any of the Islamist terrorist atrocities in France last week or offer his condolences to the families of the victims.

Turkish Prime Minister Ahmet Davutoglu attended the anti-terror, pro-free speech march in Paris, despite the fact that just a week prior he had personally invited Khaled Meshaal, the leader of the terrorist organization Hamas, to live in Turkey after being kicked out of Qatar. Less than a month ago, dozens of Turkish opposition leaders were arrested, including the editor of Turkey’s most popular opposition newspaper.