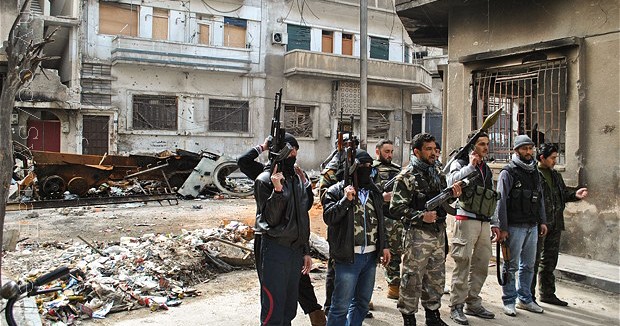 The Shiite support to the Houthi rebels in Yemen is continuing. The Saudi newspaper “Okaz” reported  (Arabic link) that senior military personnel from the Lebanese Hezbollah militia recently arrived in Yemen in order to help the rebels in their attempt to take over the country.

Local tribal sources told the newspaper that the reason for sending these militants to Yemen is the recent losses suffered by the ShiiteHouthi rebels in Yemen who are battling not only local Sunni tribes but also a large Al-Qaeda force.

The violence in Yemen is one of the most discussed issues in the Arab media for the past several months. This is actually a new manifestation of an old dynamic in which the struggle is being waged between Shiite forces openly supported by Iran and Sunni forces that are more affiliated with Saudi Arabia.

The Houthi rebels seized control of the capital Sanaa in September and have since entered into a power-sharing agreement with Yemen’s government. Neighboring Arab states believe the Houthis are set on eventually taking control of all Yemen.

A few weeks after the Houthis seized control of the capital, Ali Akbar Vilayati, a top adviser to Iran’s Supreme Leader Ayatollah Ali Khamenei, received a delegation of Houthis and was quoted as saying, “We are aware of your victories and we are very glad about it.” In October, Vilayati openly expressed Iran’s support of the Houthi rebels.

Ali Reza Zakani, a hard-line Iranian politician, declared that the arrival of the Houthi rebels in Sanaa meant that the “fourth Arab capital” (after Damascus, Baphdad and Beirut) had fallen to the hands of the Iranian Islamic Republic.

A review of the Sunni Arabic media in recent weeks by The Tower shows how deep this Iranian boast has penetrated into the Arab public discourse. Arab media now often use the term “the four capitals of Iran” to describe the Islamic Republic’s hegemony in the Middle East. One commenter in al-Quds al-Arabi (Arabic link) put it succinctly, writing “Iran 4 – Arabs 0, and the game is continuing.”

Iran’s aggressiveness is stoking alarm in Arab states that Iran is using the conflict in order to widen its power and influence in the turbulent Middle East. Saudi Arabia, the United Arab Emirates, Bahrain and other Persian Gulf states have been privately calling for the U.S. administration to work more aggressively to loosen the rebels’ hold over Sanaa and other parts of Yemen. These Arab regimes are concerned that the U.S. is too preoccupied with the rise of the Islamic State of Iraq and Syria (ISIS) in Syria and Iraq and its ongoing nuclear negotiations with Iran to respond forcefully.