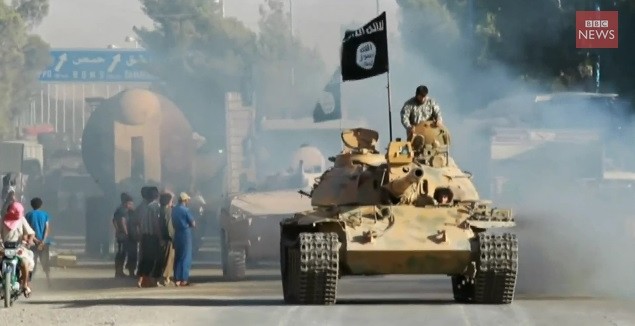 Nine Islamist rebel groups on Monday rejected an announcement made the day before by the Islamic State in Iraq and the Levant (ISIS) that the Al Qaeda offshoot was reforming a caliphate extending the group’s influence across the region:

“The terms of the caliphate have not been realized at present, especially in terms of state organizations,” the statement by the nine groups said, calling on Muslims to avoid siding with ISIS.

They also said that the announcement would be used as pretext by foreign powers who want to tilt the balance against rebels seeking to topple Syrian President Bashar Assad and would improve his image in the West as a legitimate leader.

The Sunday announcement of the reformation of the pan-Islamic state was met with criticism from the nine groups, which included militias and Islamic scholars, that “legally and logically” the announcement was “null and void.”

Al Jazeera quoted Shiite Muslim lawmaker Khalid Assadi in Iraq as dismissing the proclaimed caliphate as “nothing but a wild imagination of a desperate fanatic gang that wants to seize control in a bloody way.” He predicted that the group would eventually lose its grip on the territory it now holds from the suburbs of Aleppo, Syria, through northern and central Iraq.

The criticism comes amid statements from ISIS chief Abu Bakr al-Baghdadi, who yesterday declared himself the caliphate’s head,calling on Muslims worldwide to join the new Islamic state.